Farewell to Dianne after over 20 years with the Friends committee 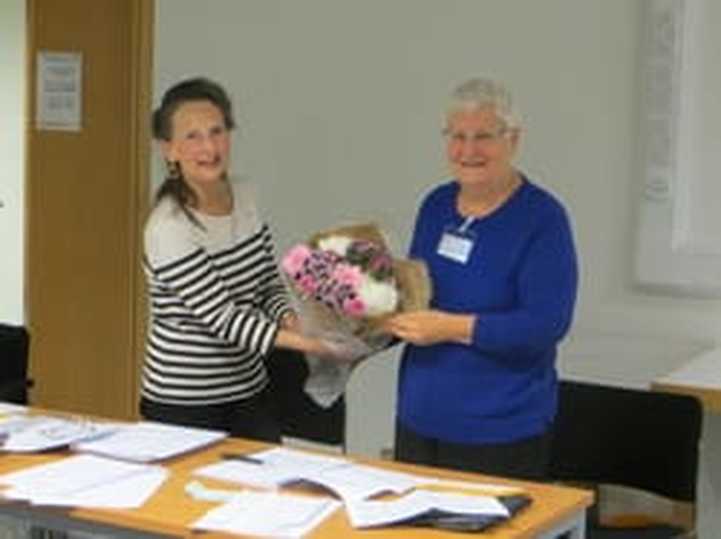 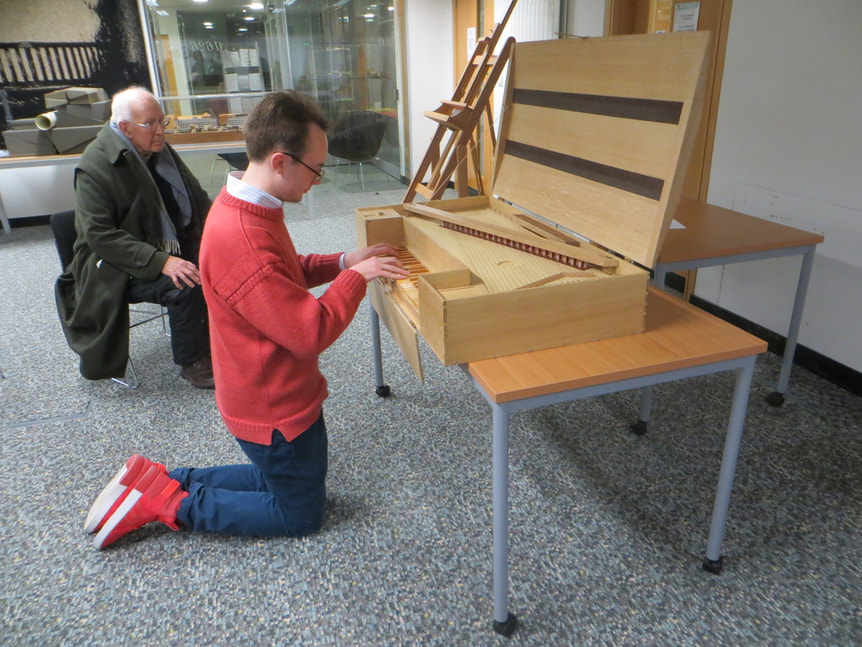 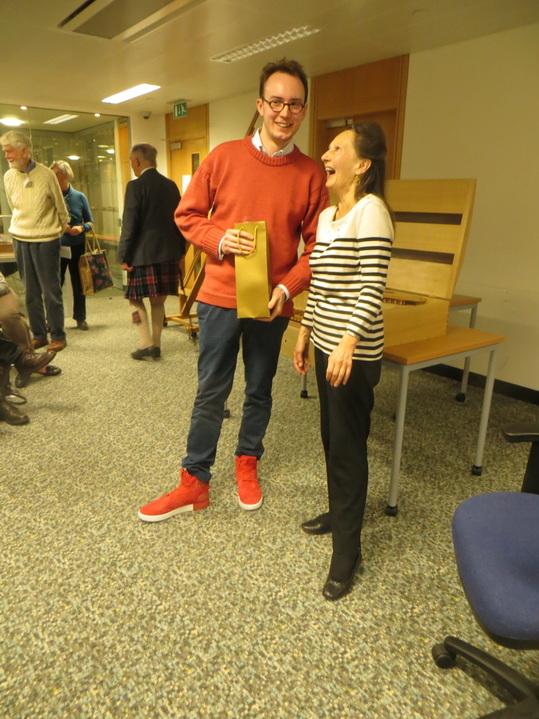 1.Welcome.
Martin Hillman, Deputy Chairman welcomed everyone to the meeting and informed those present that Pam Jackson was gravely ill and unlikely to return to her post as Chairman. Committee members expressed their shock and sadness. There was an unanimous show of approval and gratitude to Martin for assuming the post of Deputy Chairman until a permanent replacement for Pam could be found. M. H. proposed that Carola Bronte- Stewart be co-opted on to the committee. P.A. seconded the motion.

3. The Minutes of the meeting held on Tuesday, 16th May, 2017 were approved as a correct record with the exception of further explanation of Ruthanne Baxter’s plans for promoting the Friends’ activities on social media. P.A. will amend the May minutes accordingly.

3a). Jeremy Upton, Director of Library and University Collections, addressed the meeting in response to fears expressed in a letter, composed by the Deputy Chairman, previously circulated to the committee, and intended for the University Principal, Sir Timothy O’Shea. The main concerns outlined in this letter were: a) the loss of one (of two) academic posts at St Cecilia’s as principal Curator Darryl Martin was not being replaced and b) the role of the remaining curator, Jenny Nex , which would be academically curtailed as she would no longer be able to be a primary supervisor for PhD students and would no longer be supported in academic research.

J.U. advised that there had indeed been a re-balancing after the re-opening of the Hall. There had been an increased emphasis on the museum aspect of St Cecilia’s with the focus shifted to public outreach and the staff had subsequently been required to cope with much greater visitor numbers. He acknowledged that the Friends had legitimate concerns but remained positive about new directions envisaged for the music and art curators and in general for the proposed inter-disciplinary model of teaching in the Arts and Humanities .

J.U. reminded the meeting that the University School of Music made the academic decisions regarding St Cecilia’s and urged the committee to contact Dr Elaine Kelly, Head of Music, to discuss the significant changes within the school and to learn of their plans for St Cecilia’s. He also suggested that after meeting with Dr Kelly, the committee might find it very useful to communicate with Professor Dorothy Miell, Head of the College of Arts, Humanities and Social Science, as she is keen to make more use of St Cecilia’s.

Jenny Nex informed the meeting that the university was reconsidering all its under- graduate and post – graduate music courses as they were all running at a deficit. She added that there were plans to create a broad-based musicology masters which would involve exploring music from different perspectives using an inter-disciplinary approach. Furthermore, the role of curator was in flux and the university had plans to model Jenny’s job on the that of the Art Curator’s and that although nothing had been finalised, the intention was that the curators would do their own work with a team under them to help with bureaucracy and that both curators could be part of an inter-disciplinary supervisory team for PhD students.

G.F. pointed out that the Friends provided Bursaries to support the study of early musical matters that can be linked to St Cecilia’s and therefore had an obvious interest in the academic life of the Hall.
J.U. noted that changes to the curatorial role would be in place in the near future and that it would be better to have the full picture regarding these changes before making decisions regarding approaching either the Principal or university funders with our concerns. He ended by stating that he regarded the Friends as partners and valued their commitment to the work of St Cecilia’s

A.M. agreed that we should approach the academic stakeholders in the Hall before approaching the Principal. This comment was unanimously approved by the meeting.

M.H. took the opportunity to state that he was willing to stand as an interim chair for 13 months only and that unless someone else was found to replace him, he would wind up the committee at that point.

D.J. commented that perhaps it was time for the university to take over some of the role of the committee and that winding up might be not such a bad idea.

4.) Matters arising from the minutes: 5. Fringe Concerts:
2017 concert series-audience figures in the refurbished Hall. Unfortunately, the Treasurer could not provide the committee with accurate numbers as the number of tickets sold by the Fringe box office had not yet been made available.
2018 concerts series: J.N. presented a paper which highlighted the difficulties involved with managing a high level of footfall in terms of general visitors to the Hall while at the same time hosting a full- length concert with interval refreshments. She outlined two options for Friends’ Fringe concerts going forward:

Option 1 would be to continue with the 3pm slot but offer hour-long concerts without interval. This would remove the complications associated with having general visitors and refreshments for concert goers at the same time in the Laigh Hall. J.N. also felt that 1 hour concerts might attract more audience members as it would fit better into packed Festival itineraries and perhaps be more attractive to casual visitors who happened to be in the Hall at performance time.

Option 2 would be to continue with full- length concerts with interval but move them to after public opening hours perhaps at 5.45 in line with EIF concerts at the Hall, or as evening concerts at 7pm. There would be an added cost of hiring a servitor to man the front door
After discussion, the committee decided that option 1 was the better way forward and agreed that the revenue from refreshments and publications at concert intervals entailed rather a lot of work and not much revenue.

J.N. then introduced proposals aimed at broadening the remit of the concerts to include more types of instruments. This would enable the concerts to better reflect the range of instruments now on display in the Hall and perhaps induce expert players to play collection items where appropriate.

J.N.’s final proposal was that there should be an annual concert dedicated to Sir Nicholas Shackleton using one or more carefully selected clarinets from his collection. Funding for this would come from the Shackleton Bequest.
The committee agreed enthusiastically with all these programming proposals

6. Treasurer’s business.
A.M. reported that he continued to have problems with the Bank of Scotland who had still not recognised him as having a mandate to operate the Friends’ finances. He added that currently Dianne Fraser and Martin Hillman had authority to sign cheques for the Friends and therefore, according to the Bank, had this mandate.

A.M. presented the draft accounts of the Friends of St Cecilia’s Hall and Museum for the year ending 31st July 2017, stating his intention to submit the accounts and charities regulator forms to Malcolm Macrae in December.
Giving an update on membership( 6 new life members joined this year and 42 renewed annual membership),

​A.M. went on to discuss some of his observations, as a new treasurer, concerning membership. He felt that a more rigorous approach was needed to create an accurate membership list and suggested the possibility of a fixed date from which to run annual memberships. He was also of the opinion that membership fees should be raised and at the same time offer some incentive to members.

A. M. confirmed that the assets of the Friends amounted to £31, 000, a much lower figure than in recent years. This could be explained by the two major projects of restoring the concert hall organ and paying for the new teaching lab in St Cecilia’s , the latter costing £25,000 and coming off the 2017 accounts. There are further commitments of £5,000-£6,000 which will come off next year’s accounts.

On looking at the sources of income available to the Friends, A.M. expressed the view that more income could be generated from Fringe concerts and catering by raising prices. He suggested that specific pricing of tickets be left to a later meeting but gave, as an example of higher catering pricing, £3 charge for a glass of wine.

A.M. then led a discussion concerning payment rates for musicians performing in Friends’ Fringe concerts. He proposed that the committee ensured that the minimum payment for each artist would be £100. The committee fully supported this view.

M.H. proposed and G.F. seconded that the Treasurer’s accounts be approved. The committee agreed.

7. Website report
R.F. reported that there were no problems on the technical front and there had been neither complaints nor compliments concerning the site which typically had 320 – 450 hits per week with news and forthcoming events being the most popular searches.
R.F. confirmed that he had renewed the subscription to weebly, the website provider, and he asked, as always, for more information from all concerned in order to keep the website fresh and relevant. It was suggested that R.F. contact Erica Schwarz and ask her to send him the Soundboard file in MS word format.
J.N. agreed to have R.F.’s name put on email distribution lists so that he would automatically be kept up to date with information of events, news and information concerning St Cecilia’s.

Have you considered becoming a Friend of St Cecilia's Hall ?

Follow this link to Friends membership page for more details